Eulogy read to the General Meeting of the International Association of Buddhist Studies on Friday August 25, 2017 in Toronto, by Paul Harrison, Stanford University.

It is my sad duty this evening to say a few words in honour of our beloved colleague, and honorary member of this association, Fernando Tola Mendoza, who passed away on July 18 at the age of 102. 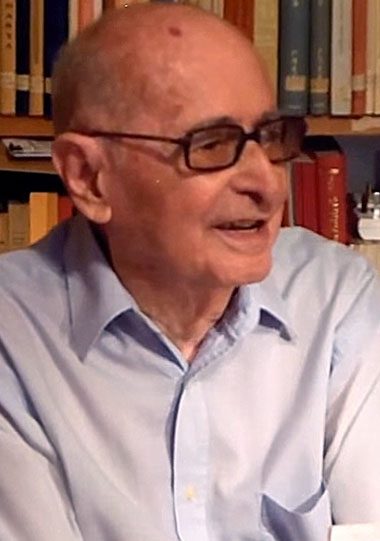 Fernando Tola (1915-2017)Born in Lima, Peru, in 1915, Fernando studied Classics in Belgium, France and Italy, before returning to his homeland to complete his university studies. His earlier publications dealt with a wide range of classical subjects and authors—he wrote on figures as diverse as Pindar, Aristotle, Sappho, Ennius and Aeschylus.

Fernando’s renditions of the Yogasūtras of Patañjali, the Rig- and Atharva-vedas, the Bhagavad-Gītā and so on testify to his wide range of interests and abilities. He knew fourteen languages.

Much of this work, perhaps most of it, was not done alone, but co-authored with his wife and long-time research partner, the Argentinian Buddhologist Carmen Dragonetti. The two were inseparable, seldom seen apart, and together they maintained an amazing level of productivity right up to the time of Fernando’s death.

Fernando was no less remarkable for his courtly manners and gentlemanly approach to scholarly exchange, which endeared him to all who encountered him. I first met him in 1981, when I was fresh out of graduate school, and remember how positive and encouraging he was to a young scholar still decidedly wet behind the ears. He was like that to everyone, a paragon of old-world learning and charm.

For his many contributions to our field, and above all for keeping the lamp of Buddhist learning alight in the Spanish-speaking world, he was made an honorary member of our association at the Taipei conference in 2011.

We have lost one of our finest, and our thoughts are with Carmen, now bereft of her heart’s companion and co-worker of many decades. Imagining how she must feel at this moment makes us even sadder at Fernando’s passing, but we also rejoice at an extraordinarily long life lived in the service of an indefatigable passion for learning.