Alexander William Macdonald passed away in France, his ‘terre d’élection,’ on February the 5th, 2018. His unusual personality and scholarly career are narrated in what he called ‘my own rnam thar‘ part of which has been published1. 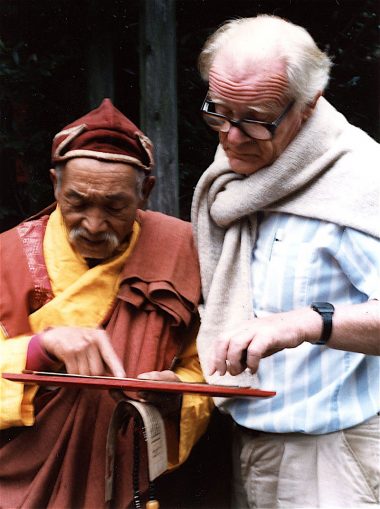 Born in Scotland, near Dundee, in 1923 he volunteered to join the Royal Scots for service in the Indian Army, and in 1942 was sent to India as an officer cadet at Bangalore, and six months later became Second Lieutenant in the 10th Gurkha Rifles whose regimental centre was, in those days, situated at Alhilal in the Kangra Valley. This was the beginning of his encounter and mutual exchange with the Indian society, and his apprenticeship of Nepali. A month’s leave in July in Lahul brought him in contact, near Kyelong, with the first Tibetans he had never seen.

Back to England in 1946 he studied at Oxford and in 1949 moved to France, drawn by the amazing work of the French ‘Orientalistes’. With open-mindness he embraced the study of a variety of instruments of investigation, such as philology, sociology, ethnology, history of religions, Sanskrit and Tibetan. Among his teachers were Louis Hambis, Louis Renou, Marcelle Lalou, Louis Dumont, Claude Lévy-Strauss and Paul Mus with whom Alexander Macdonald shared a similar intellectual horizon situated at the opposite extreme of inward-looking2.

In 1958 he left Paris for Kalimpong where he would spend two years. His biographers justly note that, at that epoch, Kalimpong was still the terminus of the caravans coming down from Tibet and the place where in 1959, after the Lhasa events, the Tibetan refugees were arriving.

A man of human and cultural interests as he was, Alexander Macdonald tirelessly walked on untrodden paths. In the footstep of his predecessor Jacques Bacot he went in search of local narrative, music and drama, unknown ritual, and unexplored social practice3.

Alexander Macdonald took an important part in bringing together Asia and Europe, and his frequent periods of field-work in Nepal, or with the Na-xi (Yunnan), or in Sichuan were also the occasion to invite his interlocutors to go in search of their own history. And in so doing he promoted the creation of chairs of sociology and ethnology in Asia.

As he notes in his autobiography (rnam thar) a big step forward in the mutual cooperation of foreign students of Buddhism was taken in 1976 through the impetus given by Professor A. K. Narain who was then at the University of Wisconsin, Madison and who promoted the creation of the International Association of Buddhist Studies. In 1990 Alexander Macdonald was elected General Secretary and, together with the then President David Seyfort Ruegg — who, incidentally, together with Jan W. de Jong had been his classmate in Paris, — organized the IABS Conferences of 1991 (Paris, France-Unesco), and of 1994 (Mexico City).

In 1979 he was among the membres fondateurs of the International Association for Tibetan Studies whose creation took part at St. John’s College (Oxford) from were, as Charles Ramble notes, Alexander Macdonald had left for France exactly 30 years before.

His contribution to Buddhist studies and in particular the study of the debated issue of the modalities of ‘conversion’ of Tibet to Buddhism is summarized in Steinmann & Toffin (2018 : 27)4. The authors show the dynamic of this study combining the observation of a specific frontier region, in the case in point La Phyi situated at the border of Tibet and Nepal, together with a variety of textual sources. Macdonald came to propose the idea de corriger les interprétations unilatéralement textuelles en insistant sur la question de l’importance, dans la pensée tantrique, d’une «redistribution des forces», visibles et invisibles, mettant en scène le «corps du sujet» dans un paysage concret.

And yet, as always, Alexander MacDonald, who was a very rigorous philologist, and a skilled homme de terrain, refrained from opposing ‘textual and contextual’ and chose instead to critically discuss the use and the meaning of sources.

And indeed, the diversity of his publications shows a strong concern to associate scholarly research and criticism, avoiding the categorization and compartmentalization of ideas, people, societies or scholarly disciplines, an intellectual tendency that, to paraphrase Marshall McLuhan à propos the computer massification of society that he could observe in statu nascendi, turns out to ‘exactly befitting a small world of tribal drums, total interdependence, and superimposed co-existence’.