I am sad to announce that Professor Jacques May, aged 90, passed away on 21 March 2018 in his apartment in Lausanne. He died of old age, which he regarded as a long illness. 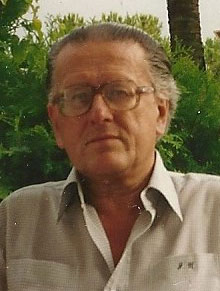 Professor Jacques May (1927-2018)Jacques May was born in 1927 in Aigle (Switzerland). He first studied Latin and Greek at the University of Lausanne (1949), where the teaching and personality of the Swiss Hellenist André Bonnard (1888-1959), a noted specialist and translator of ancient Greek tragedy, left a lasting impression on him. His early childhood fascination with Alexandra David-Néel (1868-1969) was transformed into a deep interest in “oriental” studies by the great Polish linguist, philologist and musician Constantin Regamey (1907-1982). In 1949 Jacques May moved to Paris in order to obtain a “certificat d’études indiennes” (1951). At Sorbonne University, the École Pratique des Hautes Études and the Collège de France he studied Sanskrit, Tibetan, and Indian and Buddhist studies under the guidance of extraordinary personalities such as Louis Renou (1896-1966), Marcelle Lalou (1890-1967), Jean Filliozat (1906-1982), Paul Mus (1902-1969) and Paul Demiéville (1894-1979), all of whom impressed him deeply by their impeccable erudition, kindness and, in the case of Jean Filliozat, administrative, diplomatic and “political” skills. Of those who studied at the same time in Paris, mention can be made of André Bareau (1921-1993), Paul Horsch (1925-1971), Gerhard Oberhammer (born 1929), and the French japanologist Bernard Frank (1927-1996). Jacques May could speak endlessly about that “golden age” of French Indology.

Returning to Lausanne in 1956, he served as a librarian until 1961 while he prepared his doctoral thesis, which was published in Paris (Adrien Maisonneuve) in 1959 under the title Candrakīrti: Prasannapadā Madhyamakavṛtti (Commentaire limpide au Traité du milieu). This remarkable work consisted of an annotated French translation of the twelve chapters that had been left untranslated by Th. Stcherbatsky, S. Schayer and J.W. de Jong. As noted by P. Demiéville in his foreword, May’s translation was – and remains – a monument of erudition, accuracy and elegance. In 1961 the same Paul Demiéville appointed Jacques May as the editor in chief of the Hôbôgirin, Dictionnaire encyclopédique du bouddhisme d’après les sources chinoises et japonaises, to which he contributed two long articles, Chūdō ([中道] “Middle Way,” together with Katsumi Mimaki) and Chūgan ([中觀] “Madhyamaka”). Active as a privat-docent, Jacques May taught Sanskrit and Tibetan in Kyoto, where he stayed first as a grantee of the French Centre National de la Recherche Scientifique (CNRS, 1962-1965) and then as a member of the École française d’Extrême-Orient (1965-1968).

In 1968 Jacques May was appointed as a “professeur extraordinaire” at the Faculty of Letters of the University of Lausanne (“professeur ordinaire” from 1976 to 1992, with a “chaire ad personam” of the Swiss National Science Foundation), directing ?/managing ? the Department of Oriental Languages and Cultures together with his colleagues Constantin Regamey, Heinz Zimmermann (1929-1986, since 1981), and Johannes Bronkhorst (born 1946, since 1987). Jacques May’s teaching was dedicated, in multi-annual cycles, to diverse topics such as Vasubandhu’s Abhidharmakośa, the Mahāyāna Sūtras, the life of the Buddha, and Sanskrit readings such as the Vajracchedikā Prajñāpāramitā and the Saddharmapuṇḍarīka Sūtra (the two texts the present writer read with Jacques May in 1991-1992). Besides occasional collaboration with Étienne Lamotte (1903-1983), Jacques May carried on his research on Indian Madhyamaka, which resulted in the French translation of Candrakīrti’s commentary on the ninth chapter of Āryadeva’s Catuḥśataka (“Āryadeva et Candrakīrti sur la permanence,” 1980-1984). Jacques May also supervised the doctoral theses of Tom J.F. Tillemans (his successor in Lausanne, 1992-2011) and Cristina A. Scherrer-Schaub (born 1947, professor of Indian Buddhism at the École Pratique des Hautes Études in Paris until 2015). He was involved in the doctoral research of the Geneva-based japanologists Jérôme Ducor and Michel Mohr.

Wishing to make his retirement a “true retirement,” Jacques May published nothing after 1992 but continued to actively supervise the PhD thesis of his Korean student and wife Kim Hyung-Hi, published in 2013 under the title La carrière du Bodhisattva dans l’Avatamsaka-sutra ; Matériaux pour l’étude de l’Avataṃsaka-sūtra et ses commentaires chinois (Peter Lang). As long as his health allowed, Jacques May kept travelling, notably in Asia and in South America. Those who had the privilege to know him remember an endearing personality with much wit, a touch of cynism and (often dark) humor. As his impeccable French translations abundantly testify, Jacques May was a very talented writer; he was an expert in eighteenth-century French prose and late nineteenth-century poetry, above all Stéphane Mallarmé (1842-1898) and his famous “aboli bibelot d’inanité sonore.” Curious about everything and naturally inquisitive, there was very little Jacques May, who lived among dictionaries, encyclopedias and maps, could not say about nineteenth-century Vienna or the work of Mozart; in his hand-written correspondence (Jacques May never used a computer in his life), he would quote Vasubandhu and Nāgārjuna in Sanskrit. Although he was not very fond of Yogācāra Buddhism, his article “La philosophie bouddhique idéaliste” (1971) has become a classic and remains, as Étienne Lamotte said a little less than fifty years ago, the best introduction to the topic. Jacques May will be very badly missed by his friends, his wife, and his family.

The funeral will take place in Lausanne on Wednesday 28 March 2018.