After a long and bravely fought illness Michael Hahn left this world on 12 July 2014. Although foreseeable, his death came yet unexpectedly since he had been surprisingly active, and only a few days earlier he had vividly discussed the most urgent publications which he still wanted to finish in the immediate future. 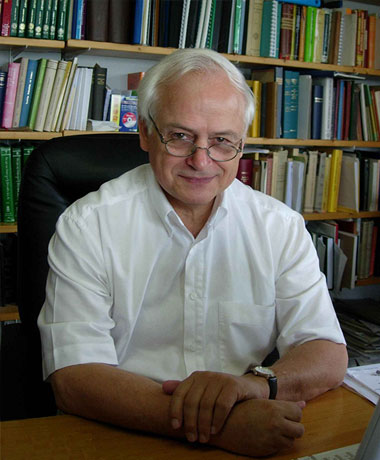 Prof. Michael Hahn, 1941 – 2014 Due to his multi-faceted interests it is not easy in a few words to characterize him as a scholar and to outline his contributions to the field. He studied Indology in Marburg with Wilhelm Rau and Tibetology with Claus Vogel, and in view of these teachers it is not surprising that Hahn became a philologist in the best sense of the word. In 1967 he finished his dissertation on Jñānaśrīmitra’s Vṛttamālāstuti, a hymn addressed to Mañjuśrī where each stanza serves to illustrate a different Sanskrit meter and a text at that time preserved only in a Tibetan translation. Ever since, Hahn was concerned with recovering the Sanskrit literature of Indian Buddhism, often with the help of such Tibetan translations. Already in 1968 he became assistant professor (“Wissenschaftlicher Assistent”) at the University of Hamburg where he finished his second dissertation (“Habilitation”) in 1972. One year later he was appointed associate professor (“Wissenschaftlicher Rat”) in Bonn. In 1978 he was offered the temporary position of local representative of the Nepal-German Manuscript Preservation Project at the Nepal Research Centre, and he could stay for one year in Kathmandu. In a way this was paradise for him, living in the middle of an Indian culture shaped by Hinduism and Buddhism alike, and being surrounded by thousands and thousands of old and important manuscripts which only awaited study. Ten years later, in 1988, he was invited to the chair of Indology in Marburg and thus returned to his original alma mater. On July 12, 2007 he gave his final lecture at the university and went into retirement, which in his case meant numerous invitations to lectures, conferences, research stays and guest professorships all over the world.

Within Sanskrit Buddhist literature, his interest was equally focussed on works of ornate poetry and those of narratives. These two genres often overlap, best exemplified in the Garland of Legends of Haribhaṭṭa, a famous poet whom Hahn brought back to attention and whose Jātakamālā he considered one of the most important surviving works of classial Sanskrit literature. When searching for the legends composed by Haribhaṭṭa he came across another author of legends, Gopadatta, and the study of the two Jātakamālās and of the relation between those two authors occupied him for several years. Besides his studies of their Jātakamālās, the anonymous Mahajjātakamālā and, albeit to a lesser degree, those of Āryaśūra and Kṣemendra, Hahn worked on plays, most notably Candragomin’s Lokānanda and Harṣadeva’s Nāgānanda, on epics (e.g., Śivasvāmin’s Kapphiṇābhyudaya), on letters (Mātṛceṭa’s Mahārājakaniṣkalekha and Candragomin’s Śiṣyalekha), sermons (e.g., an edition of the Sankrit and Tibetan texts of Nāgārjuna’s Ratnāvalī which became the initial publication of the Indica et Tibetica Verlag founded by Hahn), hymns (e.g., Rāhulabhadra’s Prajñāpāramitāstotra and Jñānaśrīmitra’s Vṛttamālāstuti), and gnomic verses from the various nītiśāstras preserved in the Tanjur, among them the Prajñāśataka ascribed to Nāgārjuna. With the Vṛttamālāstuti, Hahn had to face a very complicated and sophisticated text right at the beginning of his career. However, he saw such texts as an invitation rather than a threat, and his fondness of studying them found satisfaction not only in extremely difficult poetical works like the Kapphiṇābhyudaya, but also in Ratnākaraśānti’s Vidagdhavismāpana, a work on Sanskrit riddles, and in the Chandoratnākara, a complex work on Sanskrit metrics by the same author.

One of his main aims was to edit and translate texts which had been unpublished, considered lost or or even forgotten, and for this purpose he worked with manuscripts and became an expert of the paleaography of later North Indian and Nepalese scripts. Since many of the works he studied were at first available only in Tibetan translations—as again for instance the Vṛttamālāstuti whose Sanskrit text he discovered only many years later—he became also an expert in the specific language of the Tibetan translations of Indian Buddhist texts. However, he did not consider Tibetan as only ancillary to recovering an Indian original, but also studied the language in its own right; Tibetologists will probably remember him best as the author of the Lehrbuch der klassischen tibetischen Schriftsprache, first published in 1971 as the result of an introductory course at the University of Hamburg, which later saw six reprints and became (in commercial terms) the by far most successful publication of the Indica et Tibetica series. Besides writing this grammar cum textbook, he was always interested in questions of Tibetan morphology, etymology and word formation, and he published a number of his findings in altogether nine papers under the title of Miscellanea Etymologica Tibetica.

Hahn’s openness to people and to all sorts of academic questions made him an excellent dialogue partner for students and colleagues alike. Until his last days he was willing to share his knowledge, letting others profit from his insights and the sheer amount of facts readily at his disposal, and even when his strength weakened he never showed the proverbial “closed fist of the teacher” (ācāryamuṣṭi). He will be remembered for his enthusiastic handling of intricate philological problems and for the many excellent editions and translations he has left us. He shall be sorely missed by his students, his friends, and his colleagues, not only for his scholarship, but for his humor and his kindness.